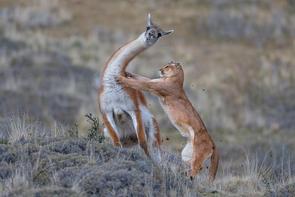 At irregular intervals the GDT awards the Fritz Steiniger Prize for extraordinary contribution to nature photography. The board of directors decides on the awarding of the prize. In 1986, this most prestigious prize that the GDT can award was given for the first time.
The Fritz Steiniger Prize consists of an honorary award (in the form of a sculpture) and a certificate. With the awarding of the prize, the winner is also made an honorary member of the GDT.

Professor Fritz Steiniger was one of the founding fathers of the GDT, who had significant influence on the society's development throughout its first years. Dedicated to his memory, the GDT named its most supreme award Fritz Steiniger Award, which is given away for special contribution to nature photography.